My son's first birthday party is on Saturday. His birthday is not until 10 days later, though. We didn't really plan it that way, but it's the only time his Godmother could be there. She teaches in another state and has spring break right now. We didn't even find that out until the Sunday before last, giving us (and the other guests) only 2 week's notice. I've been feeling the burn, running around town trying to get stuff done. That and the time change has me tired, tired, tired. I want a nap!
Posted by Suzanne :-) at 2:26 PM 2 comments:

I both love and loathe the springtime time change. I love it because I don't get to take a walk until the late afternoon (5:30 or later), and I don't like walking in the dark. However, it always takes me at least a week to get used to the change. My body does not do well with it at all. As I type, I am ready to sleep, and it's only 3:00!

In other news, the cake was dry, and the icing was wet. Blech--it looks like the saga continues...
Posted by Suzanne :-) at 1:39 PM No comments:

I am making the cake for my son's first birthday. It's a 3-D ducky cake. I already did a run-through, with some pretty disastrous results. Well, the cake turned out fine, but my husband insisted that we try fondant instead of regular icing. I tried telling him that it wouldn't work. It's hard enough getting the fondant to look nice on a perfectly cylindrical or box-shaped cake. Let's just say that poor duck ended up looking like it belonged in ancient Egypt, lol!

I'm doing another run-through this weekend though--this time with buttercream icing (which is the suggested topping that the cake pan came with. I'm making a chocolate rum cake with green icing, a kinda tribute to St. Patty's Day. If it comes out nice, it's going to a party tomorrow.
Posted by Suzanne :-) at 2:39 PM 2 comments:

My baby boy loves my laptop. He likes to "type" and look at the pretty images that appear. It's very cute--most of the time. Sometimes he yanks keys off, and he has even managed to find odd shortcuts I never knew existed. For months, my baby has managed to change my screen resolution just by banging on my keyboard. It would be an annoyance except it's just too freaking amazing to me. I tried looking it up online to see if I could find the magic combination of keys that could form such an operation. I've looked through pages of Google results, but no one has written about it. I did find out that there is a utility that can be used to keep everything the same proportion in lower screen resolutions but no shortcuts. Today, however, I had a breakthrough and actually discovered it myself. I actually saw the section of keys he was pressing and started pressing random combos and finally found it: 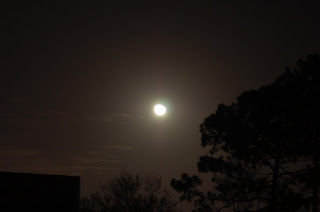 We got to see the end of the eclipse on Saturday. We didn't get to see the moon when it made its appearance on the horizon, though. We were at mass (we always go on Saturday evenings--it's just a better time for my son). When we got home, my husband insisted on taking the pictures, so I didn't get to. It's funny because he kept asking me what to do, lol! A lot of them turned out underexposed (too dark). Some turned out overexposed (too light). Many were blurry! But, a few turned out ok. That's not his fault, though. Our camera is a DSLR (digital single lens reflex). It allows us to do all kinds of cool things like slow the shutter speed (which you have to do in nighttime pictures so they don't turn out so dark you can't see them) or speed it up (for action shots) and increase or decrease the aperture (make the whole picture clear or fuzz up the background). We still are newbies and have to experiment a lot in order to get good shots. For example, one of the pictures we took of the eclipse (with a 5 second shutter speed) actually looks like we took it during the daytime, and the moon looks like the sun.

There's also a cool flare on the moon there. Sometimes the "bad" pictures turn out to be pretty good!
Posted by Suzanne :-) at 12:36 AM 4 comments:

I'm excited! There's going to be a total lunar eclipse this Saturday. The only caveat is that it will start before the moon rises here. So, it will either rise totally eclipsed or partially. That'll make for some moonrise! I'm going to try to take pictures of it although I doubt my telephoto lens zooms enough for something truly spectacular. We'll see ;-)

I really need to get into the habit of blogging more often. I'm such a slacker, lol!
Posted by Suzanne :-) at 3:55 PM No comments: